Why You Should Clean Dryer Vents

Take A Closer Look At Your Dryer Vent

That’s an average of 11.5 dryer fires per day. These are some frightening statistics. Hopefully they’re frightening enough to motivate you to take a closer look at your clothes dryer and it’s attached venting. In this article I’d like to answer some of the most commonly asked questions I’ve heard over the years. I ‘d also like to provide you with some things you should do and shouldn’t do to help prevent a clothes dryer fire from happening in your home.

My dryer takes forever to dry my clothes, what’s wrong? 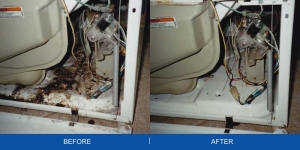 That’s an average of 11.5 dryer fires per day. These are some frightening statistics. Hopefully they’re frightening enough to motivate you to take a closer look at your clothes dryer and it’s attached venting. In this article I’d like to answer some of the most commonly asked questions I’ve heard over the years. I ‘d also like to provide you with some things you should do and shouldn’t do to help prevent a clothes dryer fire from happening in your home.

How long should a dryer vent be?

The maximum length of a dryer vent should not exceed 25 feet. Sounds simple enough, right? But there’s a little more to it than that. You must consider every elbow too. And as far as air resistance goes, every elbow is equivalent to 5 feet of straight venting. Let me give you an example. Let’s say your dryer vent has 10 feet total of straight venting and two elbows, that would be equal to 20 feet: 10ft + 2 elbows (5ft + 5ft) = 20 feet. In that example you would be under the maximum. Make sense?

So now that we know how long a dryer vent should be, “Why does it matter so much?”, is the next logical question. It matters because the small blower motor in your dryer can push that wet, sometimes heavy, lint only so far, and if the dryer vent is too long or has too many elbows that lint will accumulate much faster causing clogs and a potential fire hazard. Now I bet you’re saying, “But I empty my lint basket every time I use my dryer, shouldn’t that prevent any lint from accumulating?”. Even though that is a great discipline to have and I commend you if you do clean the basket every load, unfortunately the lint basket itself does not stop all the lint your clothes produce. A lot of the lint does get past the basket and then accumulates in the vent and also the undercarriage. Unless you have a short run with minimal elbows, your dryer vent is bound to get lint accumulation. This is not to say that the short ones don’t accumulate lint– they do. It’s just that a shorter run will take longer to get dirty than a longer one. The best rule of thumb to follow when venting a dryer is– the shortest length possible with the least amount of elbows.

Is that white vinyl stuff okay to use for venting my dryer?

Let me answer that as emphatically as I can, NO! NO!?NO! The white vinyl ducting is only supposed to be used on appliances that don’t create heat, like a bathroom exhaust fan. Otherwise the stuff can melt and if it melts, it can’t contain a fire or at the very least slow the spread of a fire if one does start. I see this stuff way too often in people’s homes. If you read the owner’s manual that came with your dryer I’d bet a dollar to a dime it says not to use the white vinyl either. Only rigid metal or flexible metal venting should be used with a clothes dryer. That’s why when Indoor Air cleans your dryer vent we replace that short piece of white vinyl with a piece of aluminum venting. And if you have an overly long piece of the white stuff we’d tell you to have the whole line replaced by a heating contractor using rigid metal piping. 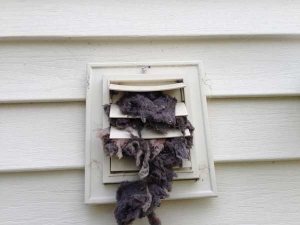 Call Today for a Free Quote

When I called the owner she got back to me right away and was able to schedule a fairly quick time slot. They arrived right on time and the gentleman was very professional and very clean and thorough. They are just the best long-term due to quality of work and long time standing in community.

First time ever having the air ducts cleaned in my 53 year old Schaumburg. I have a dog and a cat so it was a little overdue! Very happy with the job Indoor Air did. They explained the process thoroughly, pricing was aggressive, and the worker did a great job. Nice to be able to run the air now and not have dust flying around! Highly recommended

The technician arrived promptly at 7:30 and was very courteous and careful. He explained all that he would be doing, made sure to answer all my questions, and kept me notified of his progress. Our dryer vent is very difficult, but he worked for almost 2 hours to get it done right. He was super conscientious and really did a thorough job throughout the house.

Everything went great. The two technicians who came out explained everything, showed me some tips, and were very professional and efficient. My wife and I were moving into an old house with our new baby, and we wanted to clean out the system (not sure that had ever been done before). The Indoor Air guys did a great job, and left the house feeling and smelling much better.

We had not cleaned our air ducts in some time, so there was extra work to be done to get them clean. They worked with energy and efficiency to get a superior job done. The two men worked as a great team – each humming along on his share of the work, and also in constant communication with each other. Their invoice matched their quote.

Linda P.
Get a Quote Now